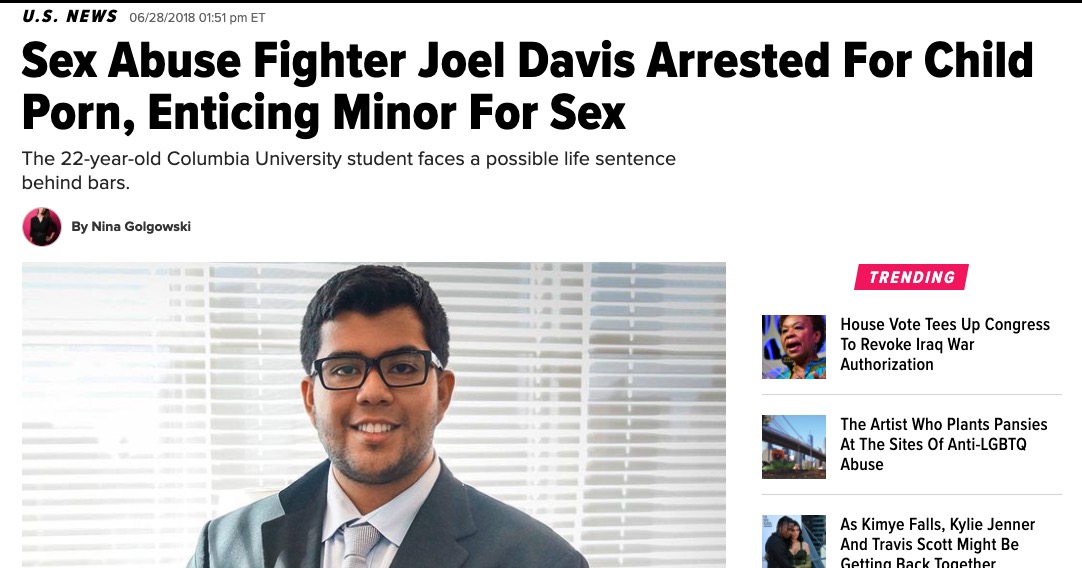 Founder Of Non-Profit To End Sexual Violence Against Youth Sentenced To Thirteen Years In Prison For Child Pornography, Enticing A Minor To Have Sex

Audrey Strauss, the United States Attorney for the Southern District of New York, announced that JOEL DAVIS was sentenced to 156 months in prison for enticing a child to engage in illegal sexual activity, 60 months for possession of child pornography, and 60 months for distribution and receipt of child pornography, all to be served concurrently. DAVIS previously pled guilty on January 16, 2020, before United States District Judge George B. Daniels, who also imposed the sentence.

U.S. Attorney Audrey Strauss said: “As he previously admitted, Joel Davis, founder of a non-profit called ‘Youth to End Sexual Violence,’ admitted to engaging in the very abhorrent behavior he had publicly pledged to fight. Davis, who also claims to be a Nobel Prize nominee for his work with his organization, engaged in sex acts with a minor, recording them, and distributing that recording to others – including an undercover FBI agent. Sex with minors is obviously never permissible, acceptable, or justifiable, and by virtue of his non-profit work, Joel Davis was acutely aware of the irreparable harm these crimes inflict on victims. Davis will now serve a lengthy time in federal prison, where he can no longer victimize minors.”

According to the Information and other documents filed in the case to which DAVIS pled, as well as statements made during the plea proceeding:

In or about June 2018, DAVIS used a dating application on his iPhone to entice a fifteen-year-old boy (the “Victim”) to engage in sexual activity with him. On June 13, 2018, DAVIS invited the Victim to his apartment building in Manhattan and engaged in sexual activity with the Victim, despite knowing that the Victim was a minor. DAVIS used his smartphone to film a portion of that conduct and sent the video to at least two others, including an undercover FBI agent.

In addition, between at least in or about May 2018 and June 2018, DAVIS possessed more than 3,700 images and more than 330 videos of child pornography, including numerous images of prepubescent minors who had not attained 12 years of age, and received and distributed material containing child pornography using a cellphone. DAVIS was arrested on June 26, 2018.

In addition to today’s prison sentence, DAVIS, 25, of New York, New York, was sentenced to five years of supervised release.

Ms. Strauss praised the outstanding investigative work of the FBI in this investigation.

Any individuals who believe they have information concerning the exploitation of children may contact the Federal Bureau of Investigation at 1-212-384-1000 or https://tips.fbi.gov/.

This case is being handled by the Office’s General Crimes Unit. Assistant United States Attorneys Matthew J.C. Hellman and Juliana N. Murray are in charge of the prosecution.