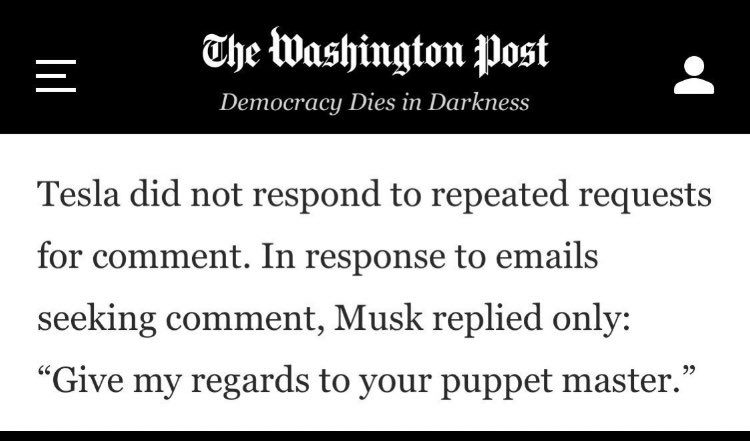 In recent months, Tesla became one of the first companies to dismantle its PR department. Clearly, it didn’t need the Main Stream Media — it sent shockwaves across the Twitterverse.   Soon thereafter, TSLA stock exploded!  It went from the mid 400s in October to over $900 in January!

In January, Elon Musk overtook Jeff Bezos of Amazon as the richest man in the world!  So the response, from Bezos, Washington Post was a hit piece on the billionaire.

Many leftists are enraged that Musk left California for Texas!

The Washington Post reported on Musk’s supposed “public meltdown” during a Tesla earnings call in April — “raging against California officials’ shutdown orders in an expletive-laden rant.”

“To say that they cannot leave their house and they will be arrested if they do, this is fascist,” Musk said on the call, adding: “This is not democratic — this is not freedom.”

Who doesn’t agree with Elon?

So when a Washington Post reporter reached out to Elon Musk for a response — Elon replied, “Give my regards to your puppet master.”

Jeff Bezos, the CEO of Amazon, purchased the Washington Post in 2013.

With the space race taking place amongst the billionaires … this is just the beginning of the media war!