DAVOS/BUDAPEST (Worthy News) – The World Economic Forum (WEF) suggests a global digital identity system that could involve implanting microchips into humans worldwide by 2026, according to an insight report and footage obtained by Worthy News.

In its February 2022 report “Advancing Digital Agency: The Power of Data Intermediaries,” the WEF seemed to back digital identity document laws in the United States and European Union. 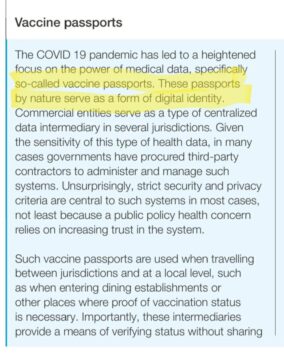 The WEF contributors noted that the COVID 19 pandemic underscored “the power of medical data” of so-called vaccine passports, which could be a base for the new “Digital ID system.”

“These passports by nature serve as a form of digital identity” to enter venues such as bars or restaurants and could tackle “digital inequality,” the report said. “At a collective level, vaccine data is an incredible public health asset.”

While the passports are already available electronically on smartphones, WEF’s founder and executive chairman Klaus Schwab talks about implanting Digital IDs into people.

In footage uncovered by Worthy News, an interviewer asked Schwab in French: “We are talking about chips that can be implanted. When will that be?”

This month’s WEF insight report confirmed what the organization views as “a fusion of the “physical, digital and biological world” in the making.

WEF head Klaus Schwab has said he seeks a “Great Reset” of economies in the “Fourth Industrial Revolution” to change the post-COVID world within the coming years.

Critics say the plans could lead to a social credit system that already exists in China to blacklist people deemed “misbehaving” against imposed social norms.

Yet, Schwab’s views have been increasingly shared by the European Commission, the EU’s executive, which called its “EU Digital COVID Certificate is an EU success story.”

“So far, Member States issued over 1.2 billion certificates. In addition, it has proved to be the only functioning COVID-19 certificate system operational at international level on a large scale, setting a global standard,” the Commission noticed.

It added that since January 31 this year, some “33 third countries and territories are connected to the EU Digital COVID Certificate system.” And countries are “expected to join in the future.”